We cover top findings from SmartBear’s 2020 State of API Report, an annual global survey of the API industry. Grab a copy here.

For the third time, SmartBear — sponsor of Swagger, SoapUI, and the Open API Initiative — has released its annual report on global API trends. The worldwide pandemic and evolving API practices have markedly impacted team experiences. Companies are focusing harder than ever on creating seamless, unified systems across all organizational facets. How exactly are they approaching their digital transitions? Here’s what over 1,500 API developers, architects, testers, and product leads had to say.

SmartBear received survey responses from May to June of 2020, unearthing current trends involving API lifecycle and drivers behind the entire API ecosystem. Questions encompassed the following:

SmartBear’s approach includes a broad range of respondents. Conversely to similar surveys — like the Cloud Elements’ State of API Integration — SmartBear’s study appears more well-rounded. The 2020 State of API Report features almost four times as many participants. Smartbear collected over 3,500 responses from professionals on 52 separate questions. The company says it’s the first report of its kind to emerge during the COVID–19 crisis.

Participating organizations ranged in size from 1 to over 10,001 — the majority of businesses employing 100 or fewer, with a substantial proportion of participants employing over 1,001. The largest number of companies surveyed employ 1 to 25 people, accounting for 23% of respondents. While each organizational ‘tier’ is thoroughly represented, the numbers suggest that SmartBear has high pull with smaller companies (or startups). Let’s now jump into some key takeaways.

API Development Is a Multi-Industry Venture

Some notable industries lead the way with API creation, forming the greatest proportions of respondents in SmartBear’s survey:

However, businesses from other disciplines are getting in on the action. Telecoms, utilities, retailers, and healthcare providers have kickstarted the development of their own APIs. These cloud efforts promise to accelerate digitalization for many teams. Improved customer experiences are another benefit to this transition — especially in healthcare, where building digital bridges between patients and medical providers is a growing need.

Eighteen industries are represented based on SmartBear’s respondent pie graph. However, we can assume that professionals from other sectors have chimed in; their collective voices were not large enough to make the graph. Though 55% of professionals reside in those aforementioned spaces, more ‘traditional’ areas like distributed manufacturing are exploring APIs with greater frequency.

SmartBear’s findings suggest something quite interesting: though Salesforce launched the first API back in early 2000, only 45% of surveyed organizations have started providing APIs in the last five years. Only 20% of participating organizations have been developing APIs for at least a decade.

This leads us to speculate on a couple of things: API development, at least early on, was both more expensive and time-consuming. Open source tools weren’t yet abundant, and only companies with deeper pockets might’ve been willing to experiment (financially or otherwise) with providing an API. Development processes today are much more approachable — especially given the prominence of low-code solutions. User-friendliness and cloud-services adoption have made API creation more wallet-friendly. In fact, over 50% of respondents rely on cloud providers for API management.

Incentives and changing expectations are encouraging new experimentation with APIs. Let’s not forget that the largest portion of SmartBear’s surveyees are from companies employing under 100 people. It’s difficult to be a competitive startup these days without delving into digital technology like APIs.

Only 32% of API providers feel that their organization’s API documentation is above average.

What Are Companies Focusing on With Their APIs?

The most significant emphasis has been placed on internal integration between teams, tools, and systems. 64% percent of those surveyed cite this as the chief motivation behind new API development. Cost and time reductions were cited by 58% of companies, and 53% of organizations aim to extend functionality within products or services. API development has become an exercise (in part) in shoring up company bottom lines. Additionally, both internal users and customers are reaping the rewards of ecosystem enrichment.

That brings us to our next major finding: 72% of companies are developing internal and external APIs — recognizing both strategies’ value. The dichotomized approach reveals an interesting skew between companies. While 21% of professionals state that their teams only develop internal APIs, a microscopic 4% of teams share an external-first mentality. Companies are thus diverting more resources internally for indirect benefits than they are otherwise.

This makes sense when reevaluating key development drivers. Just 30% of companies have created APIs chiefly to absorb external content, and only 23% hope to monetize their APIs via external users. Accordingly, 12% to 19% measure their API’s success by its ability to drive retention and monetization, respectively.

Pushing for Standardization and Microservices

Fragmentation wreaks havoc on any software ecosystem. It complicates testing and introduces scattered functionality into the equation across multiple services. Teams always could create patchwork API strategies to power their operations — even if this isn’t optimal. Wouldn’t it be better to standardize our APIs to enable greater harmony across the board?

58% percent of professionals agree that standardization is an ongoing challenge. This represents a slight bump over last year’s numbers. The general consensus is that standardization will help businesses scale their services with greater ease; currently, companies are learning that one or more of their API products aren’t primed for expansion. Although putting your eggs in one basket isn’t typically a reliable approach, even a pinch of consolidation could simplify development immensely.

How do we measure API growth? Companies often assess usage and traffic metrics across a service, though the monolithic age is rapidly waning globally. Today’s software ecosystems are comprised of microservices — which facilitate speed, feature development, and overall flexibility. Microservices are compatible with continuous integration and continuous delivery (CI/CD) practices, and teams are thus investing heavily in this modern architecture. According to SmartBear, 65% of experts predict that microservices will drive the most short-term API growth. This stands head-and-shoulders above alternate options chosen by surveyees.

We can thus expect the next wave of APIs to play nicely with microservices. Development and maintenance will become much more manageable once teams embrace this new reality. It’s clear, however, that teams must overcome skills-and-experience deficits. Code complexity is another hurdle that needs to be cleared for 38% of companies.

Planning for the Future of APIs

It is clear that professionals across industries need to consider open, shared APIs in pursuit of a unified environment. This is true internally and for a company’s greater place amongst the entire API landscape. Public API marketplaces and similar online destinations are exceptional resources for all developers.

In a similar vein, 82% of respondents assert that OpenAPI will lead the charge as today’s dominant standard. The SmartBear-donated Swagger — now OpenAPI, transitively supported by Google, IBM, Microsoft, and others through the Linux Foundation — has become a stable API definition format with strong community support, now on v3. The API industry is moving cohesively towards one primary standard, which can only boost future API development efforts and industry interoperability. 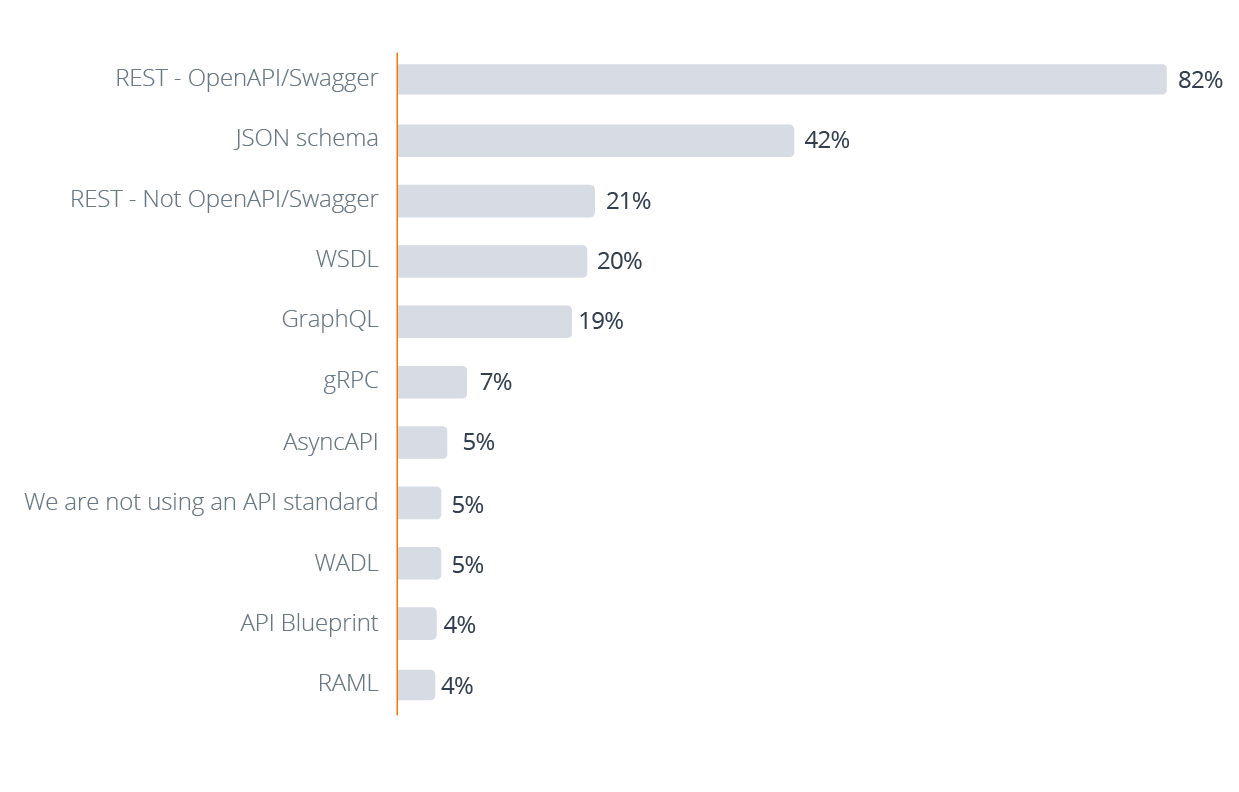 82% of organizations use the OpenAPI Specification, up from 69% last year.

The state of APIs in 2020 is strong and continually evolving, and it appears that a solution now exists for a common problem. As teams continue creating APIs at a breakneck pace, building a cohesive digital landscape may not be a pipe dream after all.