What is the most important thing your business needs? Cash! And how do you get cash? Customers! Without customers, there is no revenue, and the ability to acquire customers is what distinguishes a successful business from a failing one.

In this article, I will show you five ways to increase your business revenue by offering an API that third-party developers can use to build apps and consume your information. These are not the typical API business models. Instead, these are ways to make money with or without an API. What I will show you though is that these models deliver more value if executed with an API. Let me start by showing how you can increase your business revenue by acquiring more customers using an API as an inbound funnel.

1. As a Customer Acquisition Channel

APIs are not traditionally seen as acquisition channels because there is not enough data available. As API adoption continues to grow, this will change. Till then, we can draw some comparisons. Similarly to the way Web sites acquire new customers through referral traffic and affiliates, APIs need apps to refer more patrons. The more developers use your API, the more third-party applications will be built and consumed. Even if those other applications use your API to provide a single feature, more users will be consuming your API in the end. By looking at the usual channels and considering this correlation to referral marketing, we can infer that APIs have the potential to provide around 26% more Customer Lifetime Value (CLV or CLTV) compared to the average customer acquisition sources.

As a proof of this, look at Spotify. They have built a robust ecosystem that delivers great value to their customers. They are using APIs to funnel in new customers in two ways. Originally, Spotify used their API to make third-party widgets available inside their desktop application. This created an application marketplace. Since their API relaunch in June of this year, Spotify is now also promoting and encouraging the creation of stand-alone applications that make use of their API.

From this example, we can see that there are two ways to use an API as an inbound channel:

The first requires people to already be consumers of your application, and does not take full advantage of the cross-marketing potential of the app economy. The second does. Like the music publisher, you can encourage third-parties to build entirely new applications that use your API in completely new ways. While the former technique will result in a better user experience due to a tighter integration and control of the ecosystem through an application marketplace, the latter will generate the biggest impact as an inbound acquisition channel. By employing the second tactic, it is clear that Spotify has the ambition to become an API platform. If this is your intention as well, make it possible for devs to use your API in new and creative ways divorced from your own apps.

Using either of these methods, your goal must be to create a growing ecosystem of third-party developers and encourage them to innovate with your API. In so doing, you multiply your chances of acquiring more customers while also reducing your overall risk. To increase the CLTV of these customers, more app usage of your API, especially outside of your own app, will result in more referral traffic (e.g., like backlinking for your Web site). These strategies will allow you to simultaneously benefit from somebody else’s efforts.

Sounds exciting, right?! And this is just the first way an API maximizes the revenue of a business model that you can execute without one. Let’s look at another.

2. As a Way to Increase Retention

After acquisition, CLTV is the most important factor in determining the success of a business. It is a way to calculate how much profit each customer will generate over time. Retention is the number one way of increasing this key performance indicator. According to Elie Ofek, Professor of Marketing at Harvest Business School, CLTV can be calculated by using the following formula:

where ARPU is the average revenue earned per user or customer, r is the retention rate, and d is the yearly discount rate (which is often the interest rate as a proxy).

By analysing the formula, one can see that, if nothing else changes, linearly increasing the retention rate will generate an exponential growth in CLTV. On the other hand, increasing the ARPU will only increase CLTV linearly. 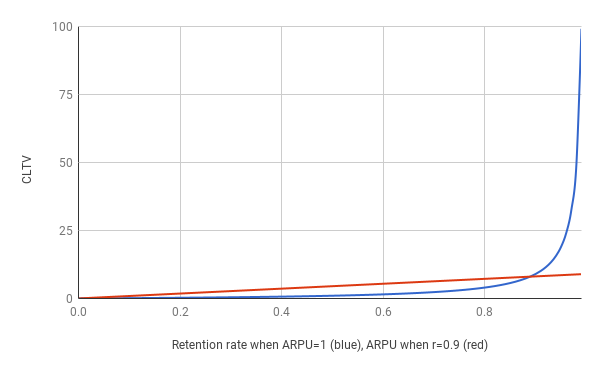 The more people that use apps that rely on your API, the more market share you will have for that type of API. After achieving critical mass, it will be hard for competitors to unseat you, or for those third-party app developers to migrate to another API provider. Consequently, it will be harder for users to move to the competition, thus increasing your retention rate.

Evernote is successfully following this strategy. By showcasing third-party applications on their App Center, they are promoting work done by external developers and encouraging users to try those products. This increases user engagement with Evernote. Another API platform that is showcasing integrations made by partners is Podio, a Danish cloud software company now owned by Citrix. They are highlighting the way in which third-party developers are allowing end users to get their work done more easily using their platform. In this way and others, they are acquiring and retaining customers through a balance of User Experience (UX) and Developer Experience (DX).

Though the effects are not as impactful, increasing ARPU also increases CLTV. The easiest way to increase the ARPU without increasing overall prices is to sell more to existing customers. An API can also help you do that, as you will see next.

3. As an Upsell Driver

Interesting API integrations present opportunities to upsell access to certain features that enable this possibility. You can make certain API features only available to those who have purchased access. A classic example of this is Web Single Sign-on (SSO). For those customers that want to allow seamless access to your API’s OAuth server using identities of their employees or customers via SAML, you can upsell them on the Web SSO feature. Salesforce does this, for example. In fact, Salesforce customers below the “Enterprise” edition do not even have access to the API. Alternatively, you can charge customers after they exceed some particular rate limit. This is a good technique to attract customers to use your API more, as it removes any cost-related barrier of adoption. As they use your API more, they will see the value of it and pay for their increased usage.

To employ this strategy, your business must have a large user base and be well known in the market. If this is not the case, you may try this strategy for very valuable API features. The danger is that users might migrate to a competitor that offers the same features for free. New market entrants may even try to break in by differentiating themselves from incumbents by offering the same features for free.

4. As an Affiliate Channel

To encourage more developers to integrate their apps with your API, you can also turn them into affiliates of your primary offering. This will drive additional demand and, thus, revenue for your company. As shown in the table above, affiliate marketing can increase CLTV by nearly 8% compared to average acquisition methods. Correlating this to an API affiliate program like I did above for referrals, you can see that using APIs to drive demand for other products has significant potential. Imagine if just one third-party app is successful in this. You will see an increase in customers, similarly to what you would see on your Web site from a devoted affiliate.

You can also turn this around and become an affiliate yourself. Like Evernote and Podio, you will want to showcase the integrations that others have done with your API. From your showcase pages, you can drive traffic to your partners and gain a finder’s fee for yourself. In this way, third-parties help you with app development and co-marketing and even pay you to drive new customers to them. Sound far fetched? A decade ago maybe, but certainly not today! Look at Apple, Google, and Facebook. It’s not just the big guys either. Look at any company providing a marketplace like Basecamp and Freshbooks. This is what being a platform offers! As an API platform, your service is integrated by co-creators who must market their inventions and cut you in on the sales transacted in your marketplace.

5. As a Distribution Channel

If your business depends on the number of people that get access to your content and interact with it, you will want to maximize its distribution. You can do this without an API, but you’ll be able to maximize it by using one. Companies like Expedia and Booking follow this strategy and are having great success. When you are searching for a hotel on your favorite Web site, you are often served up results obtained from a bigger vendor’s API, e.g., from Booking.com’s. These large providers take advantage of the fact that smaller companies do not have the resources to manage big data sets. They distribute their content via an API in a revenue sharing model.

Another good example of a company that is increasing distribuiton using APIs is Fyndiq, a Swedish online retailer. After releasing their public API in March 2011, they saw a dramatic increase in sales. A big part of this growth was related to an integration they made with a third-party platform that exposed Fyndiq’s products to all of their shops. Smaller companies can easily jump start their business by offering search capabilities on large catalogs. Because these catalogs are available through APIs, there are clear contracts and the information is easily obtained programmatically. Guillaume Ballas, 3scale CMO, touches this topic during a presentation he gave at the 2013 Nordic APIs conference in Stockholm.

As you can see, an API can definitely help you increase your revenue. All of the models described in this post can be done with or without an API, but hopefully you can see that using an API in one or more of these ways will maximize your chances of pushing your business’ topline to the next level.

As you think about how to apply these, remember that APIs can be used:

What Are the Biggest Challenges of Building an API-First Company?

What Does It Mean To Be API-First?