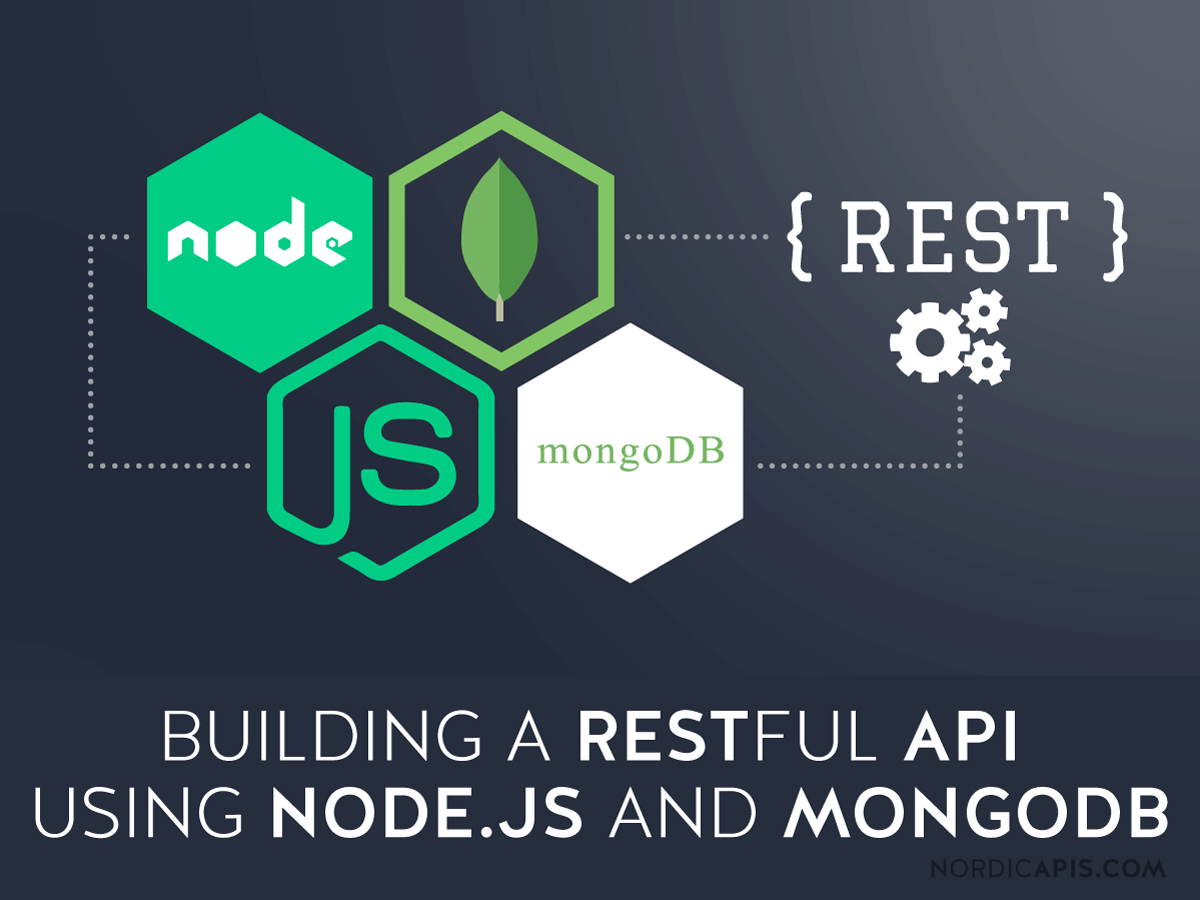 Without a doubt, Application Programming Interfaces or APIs play a very important role in communication and data exchange between servers and services. From computers to smartphones and Internet of Things (IoT), applications talk and exchange info via APIs. Almost every day we use or interact with an API service, and many sites use a custom API to scale up their website. As such, learning how to develop a custom API adds lots of value to your developer profile.

Motivated by the importance of APIs and the popularity of JavaScript (JS), we’d like to show you how to develop a custom RESTful API using Node.JS and MongoDB. Along the way, you will be able to leverage and improve your JS skills. Developers can also expand this tutorial by using MySQL instead of MongoDB or securing API by adding authentication call-backs.

This tutorial requires an intermediate knowledge of JavaScript and Node.JS along with basic knowledge of, JSON, NPM, MongoDB (a No-SQL database), and Express.JS. This tutorial is geared toward back-end web development as we will not discuss HTML, CSS or Angular. Click here to download the .zip project file for this tutorial. Click here to see its live demo.

In this tutorial, we walk you through seven steps for developing a RESTFul API using popular JavaScript frameworks such as Node.JS and Express.JS. In doing so, we learn how to integrate our API with the MongoDB database. Here are the main steps:

Some background on REST APIs is helpful for understanding and following this tutorial.

REST stands for REpresentational State Transfer. When a RESTful API is called, the server will transfer to the client a representation of the state of the requested resource. For example, when a developer calls OpenWeather API to fetch weather for a specific city (the resource), the API will return the state of that city, including the temperature, humidity, wind speed, current forecast, extended forecast, and more. The representation of the state can be in a JSON format, and for most web APIs, this is indeed the case. Other possible data formats include XML or HTML. What does the server does when you call it depends on two things that you need to provide to the server:
1. An identifier for the resource. – This is the URL for the resource, also known as the endpoint. In fact, URL stands for Uniform Resource Locator.
2. The operation you want the server to perform on that resource, in the form of an HTTP method. The common HTTP methods are GET, POST, PUT, and DELETE.

The above command will create a package.json file.

We need a file that can act as command central for our application. This file will be executed first by npm when we ask it to run our application. This file can have object instances of multiple modules that we write as well as third party modules that we install from the npm directory.
These modules are dependencies of the project. We’ll install a few of these dependencies now:

Using the above commands we created a file called app.js which will be the main entry point to the application, and we installed a few dependencies that are essential to start our application.
These dependencies are:
1. Express: This is a Node.js framework.
2. MongoDB: This is an official module provided by the MongoDB team to help our Node.js application communicate with MongoDB.
3. body-parser: This package will allow us to handle request bodies with Express.

Let’s say you are sending an HTML form data to Node.js server i.e. you made a request to the server. HTTP sends your form data in bits and pieces which are intended to get assembled as they reach their destination. To extract these bits and pieces of data and assemble it so it is in a format that can be useful, we use a body-parser middleware.

Let’s run the code for our application –

We can test the application by running the following:

The server will be listening on port 5000 for requests according to the above boilerplate we wrote.

We will need the connection string for MongoDB. This can be found in the Atlas dashboard by choosing Clusters, then the Overview tab followed by the Connect button.
We need to add the string to our app.js and make the following changes to the code.

Side note: In an ideal world, developers will benefit from adding it to an .env file to keep their environment variables separate from the application.

Here, we’ve defined the connection string to use. You need to add a CONNECTION_URL property according to the connection string you received from MongoDB Atlas. We’ve also defined the database name which we wish to create (if not already present and collection).
We establish a connection once we start again the application and use globally defined variables so that they can be used in each of our endpoints.

Now we’re going to develop endpoints for creating and querying the data. Let’s create an endpoint to add the data. Add the following code to app.js:

We aren’t doing any data validation, but when a client makes a POST request to the /personnel endpoint, we take the body and insert it into our collection. Depending on the success or error response of the database, we return information back to the client.

Now, things are starting to come together. Let’s test out our application.

If you do not receive any errors, you’ll see the personnel record for John Doe added into MongoDB database of accounting_department and under collection personnel. Feel free to add more records to your database.

Now let’s create an endpoint to retrieve all the records data. Add the following code to app.js:

The goal here is to return all data in our collection representing people. We have no query conditions, hence the empty {} in the find command, and the results get converted into an array.
Let’s test this out using cURL, a command-line tool for transferring data and supports HTTP; a very good ad-hoc tool for testing REST services.

By now let’s assume you’ve added more records into your database. API consumers will need to retrieve a single record according to its ID.

Write the following endpoint to your app.js:

We’re going to use a route parameter to get specific personnel information from MongoDB. Parameters are options you can pass with the endpoint (such as specifying the response format or the amount returned) to influence the response. This time around we have a route parameter called id which will represent an object id in MongoDB. Using the findOne method, we can get a single record based on the criteria included in the object. The id isn’t a string which is why we have to use the ObjectId.

Depending on the actual data in our database, we can do a cURL command similar to this:

In this tutorial, we’ve learned how to develop a custom API and connect it with MongoDB to fetch and manipulate the data. From here, you can take different steps. For instance, you can expand this project by adding more features like data validation to it. You can also improve the API security and salability by following Node.JS best practices. Lastly, you can try this tutorial with MySQL database or another server-side coding language like PHP or Django.
What do you think of this tutorial? What tools are you using to develop REST APIs? Kaustubh is a co-founder and senior application developer at Indica Digital. Here is a link to his personal website.