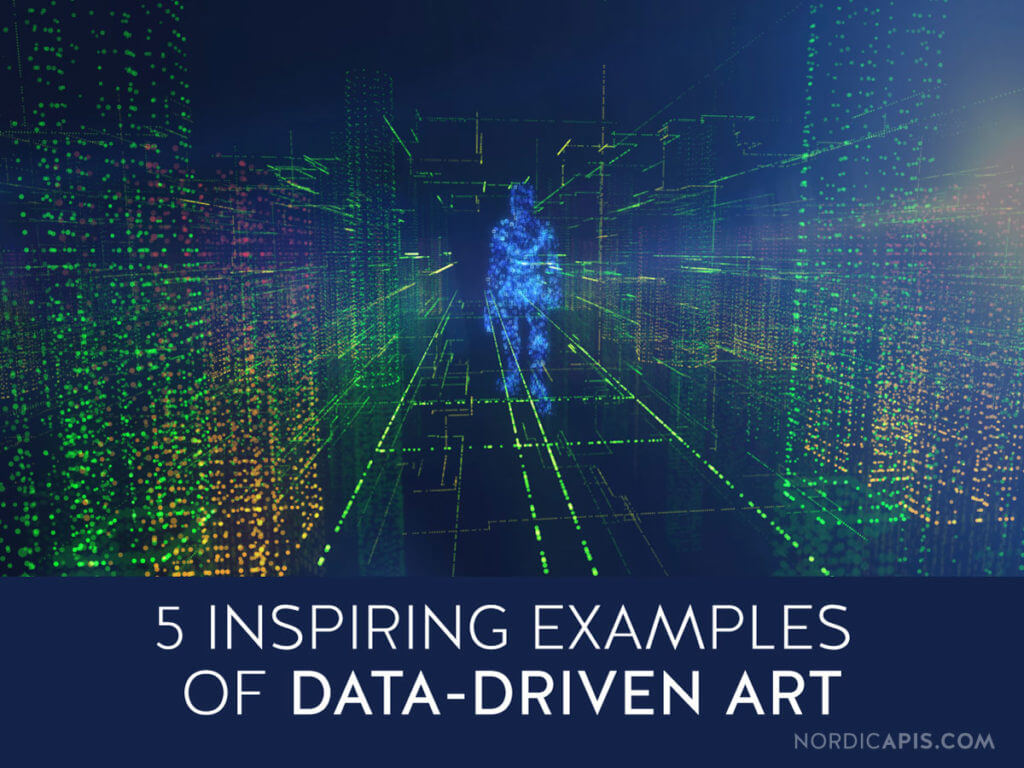 Data may come across as entirely academic at first glance. Massive databases of embedded, interlocking spreadsheets don’t exactly spark inspiration or joy, aside from the most dedicated datafile. That means a large swathe of the population, all but the most seasoned data scientists and visualizers, overlook the power and potential that open data can unleash.

Luckily, in recent years tech-savvy digital artists, developers, and researchers have been creating inspiring, innovative multimedia art in nearly every medium. Below we explore cool examples of data-driven art, from 3D modeling of weather patterns to immersive smart city visualizations, crowd-sourced music videos, steam-powered APIs, and more. Some of the art pieces are configured around data that’s been gathered manually. Others have been designed using device or web APIs in a variety of novel ways.

David McCandless is best known for founding the website Information Is Beautiful, a leading source for all things data visualization. Over the span of IIB’s existence, McCandless has created over 600 visualizations for a wide range of topics. Consider the Mavericks & Heretics infographic, illustrating the history of scientific thinkers who were demonized during their existence, only to be vindicated later on. Or check out Inter Mental Visualization, a graph of “possible tech-induced cognitive-behavioral disorders,” helpful in assessing the many ways technology is shaping the way we think.

Information Is Beautiful makes all of their data publicly available, so you could make your own Mavericks and Heretics visualization if you cared to, or filter and sort the data in other innovative ways. And the Winds Kept Roaring Through the Night, by Nathalie Miebach, interprets drastic wind patterns that caused a fishing vessel to go missing.

Weather patterns might seem opaque until you begin to really start paying attention. Once you see trends in the data, you begin to notice a beguiling mixture of awe-inspiring forces. Multimedia artist Nathalie Miebach’s riotous sculptures offer a way to investigate these complex, interwoven forces.

Miebach gathers weather data from a particular location and then weaves a basket made from natural reeds, acting as an X-Y axis to create a 24-hour timeline of shifting weather patterns. Miebach’s Weather Score Project went one step further and translated weather data points into a musical score to be performed by a chamber orchestra. The result is a 4D art installation of pressure, moisture, air temperature, even the phases of the moon: “A collaboration between science, data, musical performance and sculpture.”

Miebach’s data collection process is pretty low-tech, compiled using analog tools that could be found in your local hardware store. Nonetheless, it’s an inspiring bridge between science and art, especially at a time when climate change is such a pressing concern. “The other reason why I really like this is because it offers an alternative entry point into the complexity of science. And not everyone has a Ph.D. in science,” said Miebach.

In recent years, it seems urban planners are split into two opposing factions. On one hand, we’re seeing the rise of mega-cities, full of dense environments and soaring skyscrapers. On the other hand, cities like Helsinki, Copenhagen, and Zurich, are returning to a more old-fashioned, European style of urban development, emphasizing walkability and local communities.

These conversations may sound highly only theoretical now, but the results could mean the difference between cities of the future being Blade Runner-esque dystopias or eco-friendly, egalitarian utopias. These are some of the conversations explored by artists Wesley Goatley and Georgina Voss within their art installation Ground Resistance, created for the 2016 edition of the Milton Keynes International Festival.

Ground Resistance explores the possibilities, as well as some of the potential perils, of smart cities being “all-seeing and always-on.” The exhibit projected a map of the town of Milton Keynes, pinpointing live infrastructure data such as electricity, gas meters, traffic activity, car parks, bus routes, and more. A bell was tolled whenever a dataset was updated. In this way, viewers could visually and sonically analyze a smart city grid, as well as see the absence and limitations of such a system in certain neighborhoods.

Ground Resistance transforms the often inhuman scope of big data into more relatable terms. It’s an artistic representation of a future where tech and big data serves us, rather than the other way around.

If you care to try to recreate some of the Ground Resistance experiments for yourself, you can access real-time data streaming from the Milton Keynes area via MK Smart’s Constant Stream API.

We are drowning in data. It surrounds us, every second of every day. For example, consider Flight Patterns. The Federal Government monitors over 140,000 flights at any one time. It’s staggering to visualize how interconnected and globalized the world has become. Data is a blessing, but we may need to employ a bit of creativity and collaboration to not let it not become a burden.

Designer and programmer Aaron Koblin draws upon the power of the crowd to create a wide array of different visualizations, showcasing all manner of interesting aspects of modern living. Like how to make sense of a legacy of a legendary musician, for instance. The Johnny Cash Project is an illustration of the power and creative potential of open-sourced data. Aaron Koblin, in conjunction with video director Chris Milk, used Johnny Cash’s song “Ain’t No Grave,” to illustrate the enduring legacy of the legendary country musician.

Koblin and Milk collaborated with hundreds of visual artists, each one hand-drawing one frame. The result is a loving composite image of the impact that Johnny Cash had on so many different people. The result is startling cohesive as well, hinting at greater potential and possibilities with open-sourced data and collaborative art.

“Our lives are being driven by data, and the presentation of that data is an opportunity for us to make some amazing interfaces that tell great stories,” said Koblin.

If you wanted to programmatically incorporate crowd-sourced human creativity into your own project, there may just be an API for that; check out Amazon Mechanical Turk API, Scale API, or 99designs. 1 pixel for every Bengal Tiger that remains.

In 2008, the World Wildlife Foundation teamed up with Japanese designer Mikami Yoshiyuki to illustrate the declining population of endangered species. Beginning with photographs of endangered animals, Yoshiyuki rendered the pictures in a resolution corresponding with the species’ population. The Giant Panda was rendered with 1600 pixels. The critically endangered Amur Leopard is hardly visible at a 60 px resolution. The idea is simple but very powerful – animals are vanishing, becoming extinct.

Taking the idea one step further, programmer Joshua Smith developed a Python script that scrapes the endangered species list from the Animal Planet website and then renders an image of the animal based on the current population. Smith’s uploaded the script to GitHub so you can try the experiment for yourself. You can also take a look at the finished results at this Imgur Gallery.

One could also adapt the WWF and Joshua Smith’s premise using an API rather than scraping the Animal Planet website. The Red List’s API of Threatened Species or the Endangered Animals API could provide a similar, yet programmatic capability.

Here’s an example from Joshua Curry aka Lucidbeaming, who has written for the Nordic APIs blog in the past. His API-driven multimedia project translates data into analog reality.

Joshua Curry’s premise was to take a machine with a non-digital context and enable remote monitoring and control. For this, he selected a steam-powered model train he inherited from his grandfather, wexhich he outfitted with two Raspberry Pis, and Runscope for testing.

Curry set up an account with Thingsboard, an open-sourced IoT platform. He set up the Raspberry Pis to send MQTT Messages to an external source. The Raspberry Pis were set up with a simple snippet of Python code.

He then set up an account with Runscope for API testing. Curry set up one Raspberry Pi with a thermal monitor, which he attached to the boiler. He set up the second with a microphone monitor to assess whether the cylinder was running or not. You can read a full recounting of how Joshua Curry set up his API-powered steam engine over on the Runscope Blog.

We’ll close with one final thought. If you’re going to try and re-create some of these experiments or make your own API-driven data art, you’re going to need some sort of data visualization tool. There is a lot to choose from.

Tableau is one of the more programs for creating an extensive array of charts and graphs. OpenGL is the industry standard for creating high-quality graphics. ChartBlocks is an excellent choice for creating API-driven data visualizations. Data can be imported from anywhere using Chartblocks’ API. This makes it ideal for chaining together with some of the other APIs we’ve mentioned in this article.

In the future, we are likely only going to see more and more data. Data visualization will thus play a major part in making sense of our new data-driven reality. Data art offers an opportunity for creatives and those working in the humanities to engage in some of these important technological and cultural conversations as well.